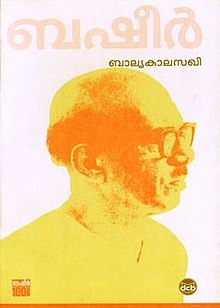 Vaikom Muhammad Basheer (19 January 1908 – 5 July 1994)[2] was a Malayalam fiction writer from the state of Kerala in India. He was a humanist, freedom fighter, novelist and short story writer. He is noted for his path-breaking, disarmingly down-to-earth style of writing that made him equally popular among literary critics as well as the common man. He is regarded as one of the most successful and outstanding writers from India.[3][better source needed] Translations of his works into other languages have won him worldwide acclaim

Balyakalasakhi (Malayalam: ബാല്യകാലസഖി, meaning childhood companion), is a Malayalam romantic tragedy novel written byVaikom Muhammad Basheer. Published in 1944, it is considered by many as Basheer's best work. The story revolves around Majeed and Suhra, who are in love with each other from childhood. By Basheer's own admission, the story is largely autobiographical.